At the time, we were paying $80 per month for our ADSL2+ with TPG. After we wanted to minimize our Internet costs, we tried switching to Dodo Unlimited ADSL2+ Broadband Internet plan for $29.99/month. This sounded great. However, what we didn’t anticipate is we also needed to also get a Dodo DSL Phone Line rental for an additional $29.99/month. As part of the deal, we got a crappy Android tablet and a USB 3G 1GB Mobile Internet Dongle (herein called Mobile Wireless Broadband or MWB) for an additional $12.50/month for a total of $72.48/month (24-month contract). Sadly, we couldn’t opt out of the tablet and Mobile Wireless Broadband (MWB) Dongle as it was included in the all-inclusive price, and removing it would not save us any money other than postage.

If you’ve already noticed some devious pricing strategies so far, keep reading. I’ll discuss my experiences regarding being deceptively charged, severe periods of Internet downtime, horrible service, and being straight up lied to.

Prior to us moving house, we informed Dodo a month early about our new address and the date of settlement. Despite this, after we moved house, it took over three weeks to get our connection up and running. It all seemed quite unnecessary. On one occasion, a Telstra technician came just to check if our home phone had a dial tone. So basically, we waited three weeks just for a “technician” to check if we had a dial tone. A dial tone is present in any phone line that is connected and can be tested by connecting a home phone and pressing the green call button. Considering the last homeowner had a dial tone, this seems ludicrous.

It took over a week to “activate” our connection on their end, despite all our hardware (i.e. modems, routers etc) being pre-installed. During these three weeks, we had to use our wireless Internet from Dodo and Amaysim. We ended up spending almost $700 dollars on mobile bills alone, much of it to Dodo for excess data from their tiny 1GB MWB Dongle. As we are running two businesses out of our unit, this was an absolute nuance. Dodo’s excuse for the long downtime is they are not a first-tier Internet retailer, unlike TPG, Telstra etc. This means they don’t have direct access to technicians. So no matter how much notice you give them, you’ll probably end up like us. Upon doing further research, I found this to be a common resentment within the Dodo community.

After the Internet finally went up, our Internet speeds were as follows: 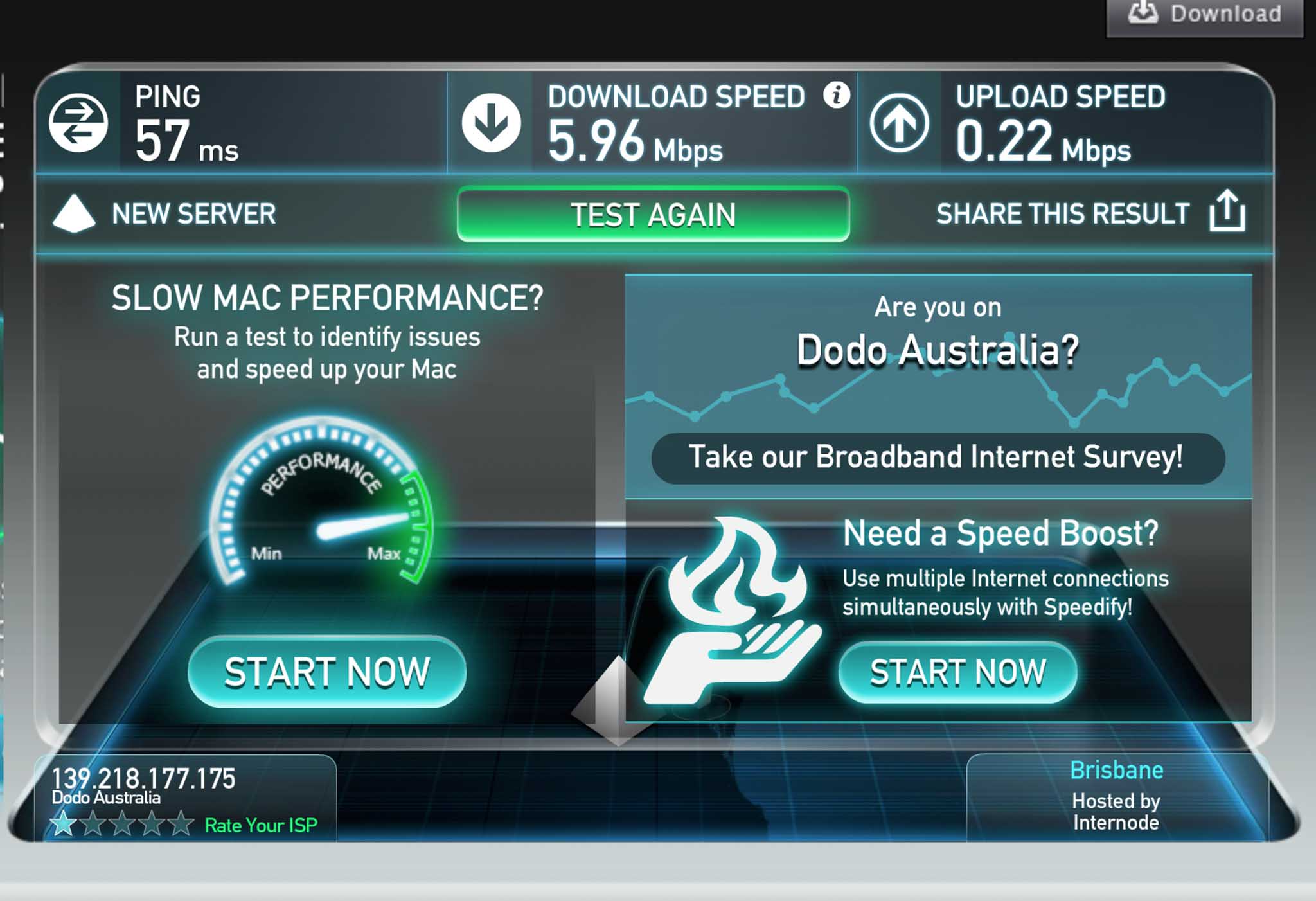 For gaming, the lag was horrible. My Dropbox which contains a mere 6GB of storage never finished uploading, despite leaving the computer on for months overnight. This led to the eventual death of my Macbook’s motherboard. The upload speeds were so pathetic that all my client’s photo galleries I had to upload were done so over my mobile internet connection, otherwise, the connection would time out (more excess data fees from Dodo’s MWB Dongle). This meant travelling to the top floor of our unit to get a mobile data connection at all. Fail. Good luck Skyping on Dodo internet too, the lag led to confusion and people talking over each other. Additionally, although 6Mbps is sufficient to see my callers video stream, 0.22Mbps means your caller will see you at a resolution approximately equal to a potato. The sound quality also, was reminiscent of speaking to someone underwater or perhaps, even in outer-space.

It gets worse. Dodo’s ADSL is notoriously unreliable. Often times I had a job to do, only to find I had to switch to MWB to get a connection at all. The internet speeds also varied. Often dropping to as low as 3Mbps down and 0.02Mbps up. On two occasions, the ping took so long, Speedtest.net timed out during the Ping test. In other words, it was too long to measure. 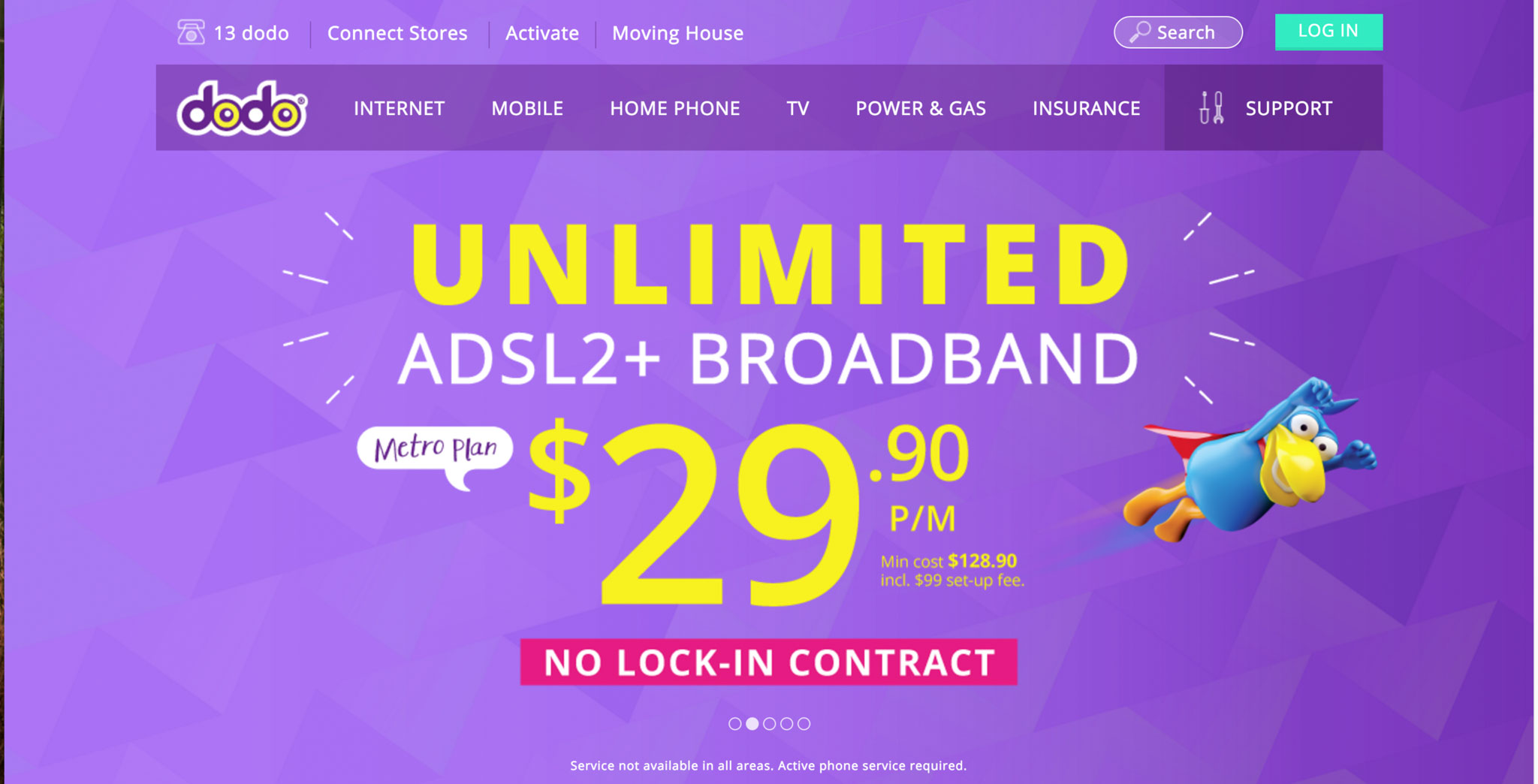 The Banner Dodo uses to advertise its Unlimited ADSL2+ Broadband 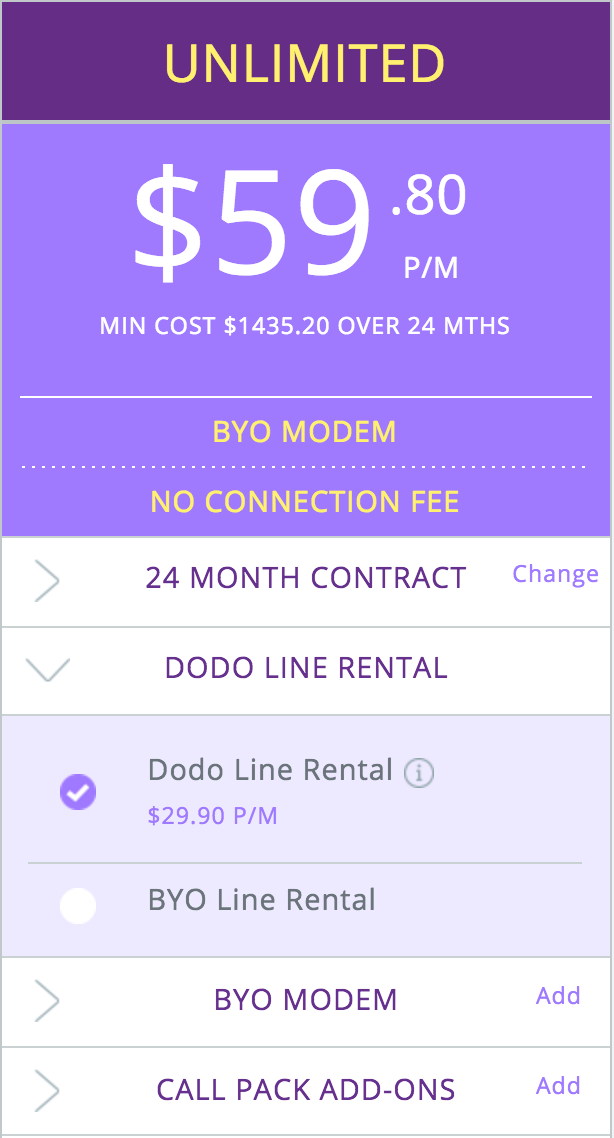 Dodo advertises $29.99 per month for unlimited ADSL2+. Just a few problems with that. First of all, you’ll need to double that cost as Home Phone Line rental is mandatory, something that is inherent with all ADSL connections. Therefore, $59.80 per month is the minimum, assuming you lock yourself into a 24-month contract. Doing so will wavier the $100 connection fee.

Likely, you’ll have to spend $19 for a modem from Dodo if you don’t have one already. Watch out though. Although they don’t disclose this, you’ll have to pay for hidden costs like the $24.99 shipping fees as well, totalling $43.99). Dodo’s excuse for this is hidden in its “critical information summary” document. You can drive 19 hours from Queensland to Victoria and pick it up yourself “for free.”

When we signed up for Internet, we had an hour-long phone call of legalese that by law had to be recited to us in order for us to be able to sign up. This compares to other ISP’s, that allow you to have the legal jargon Spam emailed to you, and have you reply with “I agree.”

When we moved in, our connection didn’t work, despite Dodo assuring us the Internet connection was active. After we checked the dial tone of all phone line outputs in the house, we diagnosed the problem to be the Dodo provided modem. Dodo ended up shipping us a replacement. It worked and we were up and running. Three months later, we started getting odd text messages stating when we were going to return the modem. At first, I thought it was a scam email from a hacker. They then said they would start charging us for the modem. I called Dodo. Apparently, I was meant to send my broken modem to them, to verify if it was actually broken. However, since three months had passed, I had thrown the broken modem out. Despite their mistake for never informing me that they needed the modem, they ended up charging me $30 for the modem, despite it being valued at $19.

For some reason, I had to be authorized as an account administrator by the account holder twice within three months. Otherwise, Dodo would refuse to talk to me. Infuriating.

Sick of the unreliability, tech support, value, Internet speeds etc we ended up switching to Wondercom FTTP Fibre Internet with VOIP (home phone over a data connection) for $69.99/month on an 18-month contract. We now get 90Mbps down, 40Mbps up and a ping of 10 milliseconds. 15, 180 and 6 times faster respectively. I emailed Dodo about the imminent cancellation the same day I started my application with Wondercom (also known as TPG). I never got a response. Of course, they would want to keep charging me. I ended up calling them, and they said it would be $352 for the total cancellation fees. I said alright, and I’d call them to cancel in a few days when my Wondercom connection would be up and running. Days later, Dodo told me $352 was only for the Home Phone Line Rental. The total cost was over $500. After I ended up having to pay this, we found out we still had to cancel the MWB Dongle, an additional $160 on top of that. Dodo ended up wavering the ADSL Internet cancellation fee. So in total, what was originally $352 for the total cancellation fee ended up being almost $700. This was infuriating not just because of the deception, but because I can honestly say I would not have switched providers if they would have told me upfront that $700 was the total cost of cancellation. Instead, they told me once my new Internet connection was already up and running – when I had no choice but to pay up.

Dodo blamed me for not complaining about the Internet speed and reliability. That was also not true. At the time I connected with Dodo, I complained about the Internet speeds and quoted the numbers. They completely ignored my complaint. Apparently, they were meant to send out a “technician” to check if there was something wrong with the apartment. Reading other reviews, this seems ridiculous, considering it would have taken weeks and our new ISP is getting great reliability and speeds over the same copper apartment connection.

In conclusion, Dodo really does deserve its Worst ISP of the Year accolade it received in 2011 voted by consumers. Just look up other reviews on Dodo ADSL and you’ll see other victimized consumers, experiencing deceptive pricing, hidden charges, terrible house moving experiences, poor reliability, Internet speeds and service. Most annoyingly of all, their business model seems specifically designed to sting customers if they want to leave to another provider. Dodo’s “free tablet and MWB” was only an additional expense they ended up charging us for when we left. Additionally, it served as an additional source of revenue as customers are forced to use the MWB when the ADSL2+ Internet was down. The CEO of Dodo when he became cognizant that Dodo had received the accolade of worst ISP of the year 2011 said he was “gutted.” However, it was because (paraphrasing) that Dodo has many new and inexperienced consumers and that was the reason for the pitiful reviews. I would not at all consider myself an inexperienced user, but sure. Additionally, the CEO stated most reviews for Dodo have been positive. If you look online, most review sites review Dodo at 1.6/5 stars. I guess this isn’t that surprising, coming from a company who’s mascot is a Duck with a cape.

Happily though, I can recommend Wondercom. It isn’t available everywhere, but I am happy with my experiences with them thus far and the Internet speeds are simply fantastic. But in any case, avoid Dodo at all costs.

I would strongly recommend you do further research at the following links. Their Facebook page, in particular, is very telling. Look at the comments section under any post, or look at posts by users to the Dodo Facebook page wall (pictured below). 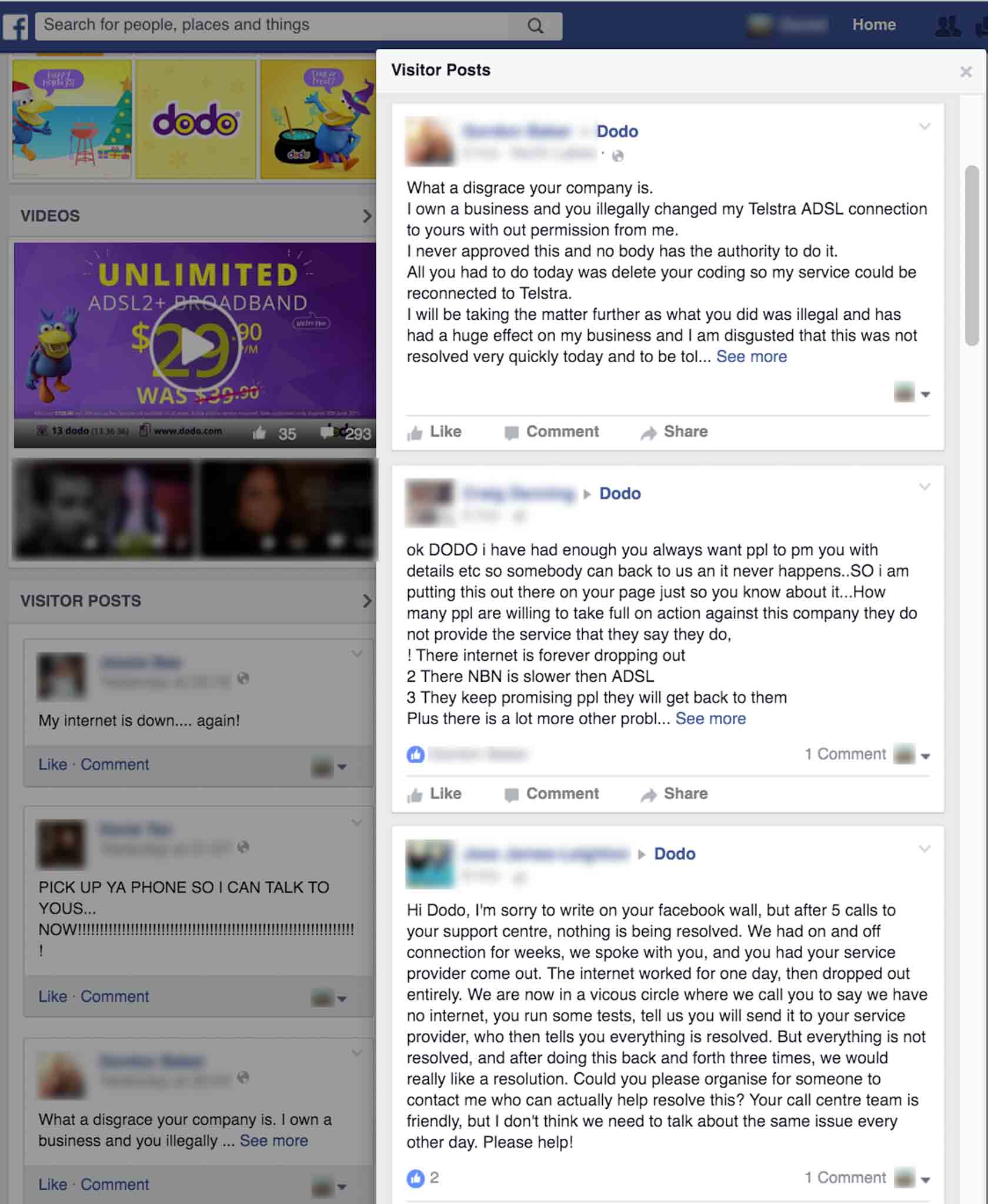 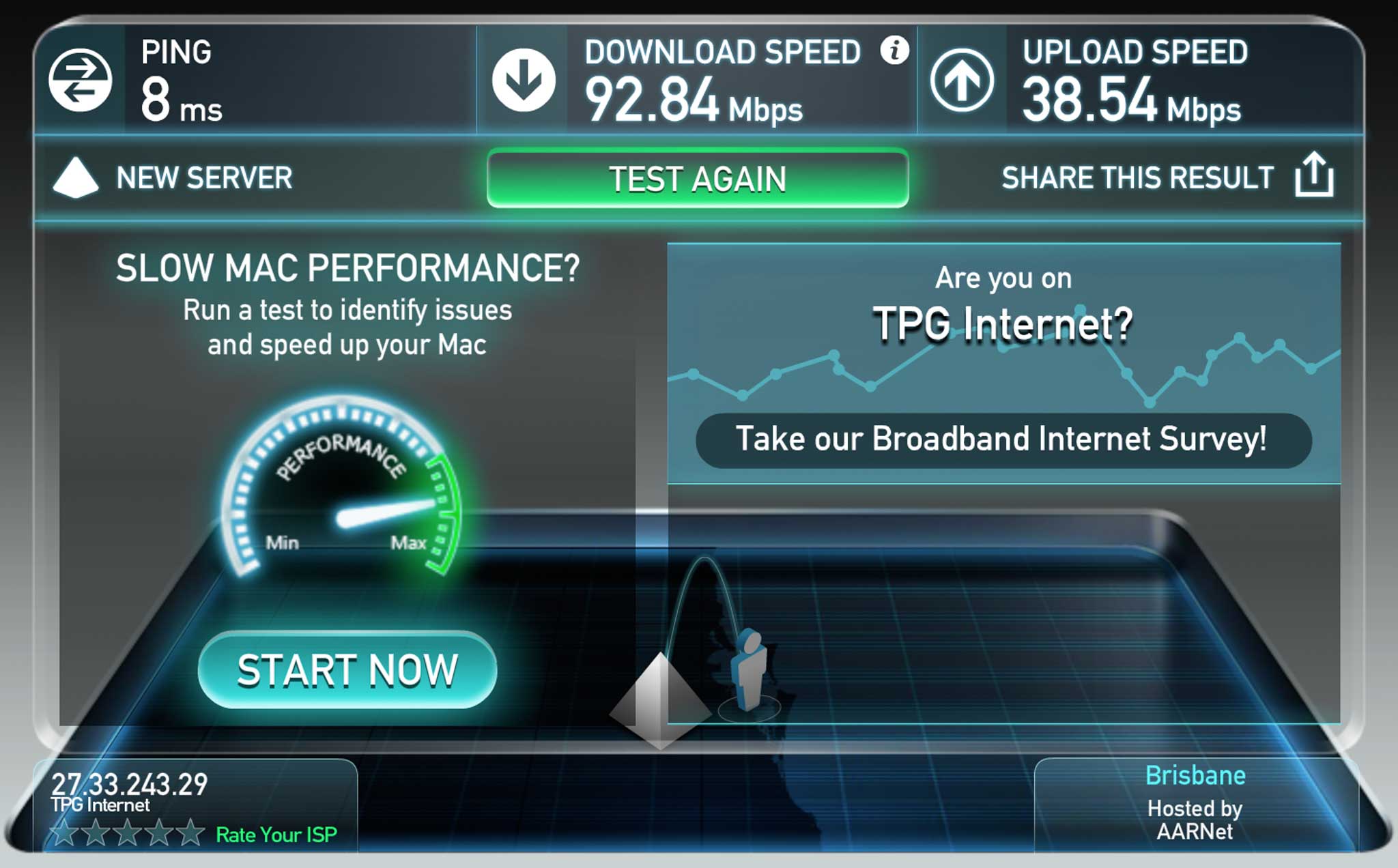