The Nikon 18-35mm is one of the most unusual lenses I have ever tested. Let’s explain. First of all, I want to preface this review by disclosing I am coming from a Sony FE 16-35mm F4 OSS, which is over double the cost. According to DxOMark, this strange lens is sharper than both the Sony and Nikon 16-35mm F4 VR lenses at the sharpest aperture (see my sharpest aperture for this lens in my independent testing later). Given the price difference, smaller size and weight and seemingly better optical performance in terms of chromatic aberration, vignetting, sharpness transmission and distortion, what’s the catch?
Turns out it’s the sharpness at varying apertures. As shown in DxOMark’s data bellow, the sharpness at varying apertures varies hugely in all the lenses. However, the Nikon 16-35mm F4 VR performs best, being sharpest at most apertures comparative to the other lenses.

I have also tested the Nikon 18-35mm F3.5-4.5 at varying apertures on my copy of the lens. The results are as follows. Quality of focus can be thought of as optical resolution (higher numbers are better). 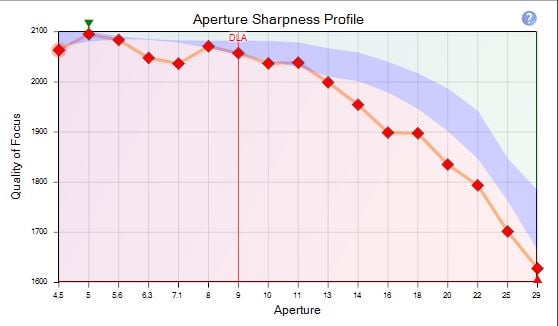 The build quality is as you’d expect for a lens less than half the price of comparable lenses. It lacks weather resistance, it has no weather and dust sealing gasket at the mount, and the lens hood is a crappy piece of plastic with no foam or texture. These light absorbent foam materials or padding embedded in the lens hood prevent light from reflecting from the lens hood into the lens, causing ghosting, flaring and reduction in contrast. This is found on both the Sony and Nikon 16-35mm lenses, but not on the 18-35.

Another thing the lens omits is any form of Optical Image Stabilization (OIS). I don’t really mind, as I generally use my ultra-wide angles on a tripod, where you’ll want to disable OIS anyway.

Ergonomically, the AF/MF switch is tiny and hard to change. This also doesn’t affect me, as I use back button focus, meaning pressing the shutter button on my D750 doesn’t engage autofocus.

The obvious drawback to the 18-35 is the fact it is 18mm at its widest. The other two lenses are 16mm at their widest. If 18mm is not wide enough, don’t buy this lens. Personally, this limits me in my use of this lens for real estate photography, as I often find myself needing to go wider than 18mm.

In conclusion, this is the most unusual lens I have ever tested. If you don’t care about the omission of OIS, weather sealing, and sharpness either doesn’t matter to you or your happy to shoot at a very limited range of apertures, the lens is a great value. If you want more flexibility and don’t mind the price, size and weight penalty, go for the Nikon 16-35mm F4 VR. It’s simply a better lens and doesn’t have any of the aforementioned drawbacks.